Many people who are discussing a “two-state solution” to the Middle East problem are unaware of the sentiment and symbolism expressed in this photo: 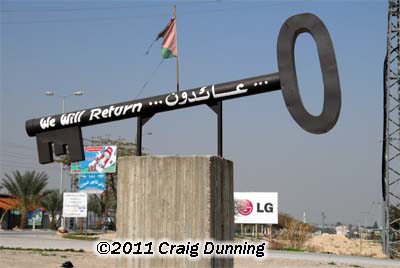 The key in the photo can be found at the southern entrance to Jericho and is used both as a reminder and a warning. It is used as a reminder to the Arab people that they have an obligation to regain any territories that are considered to be stolen by the Jews (i.e. the land between the Jordan River and the Mediterranean Sea). Also, it should be understood by the West to be a warning that a Jewish state is ultimately unacceptable in the neighborhood.

The key in the photo isn’t a unique example; it’s actually a well-known symbol among Palestinian refugees, many of whom still hold keys to property they (or their predecessors) left in 1948. This is why the final disposition of the Palestinian refugees “right of return” (to Israel or Palestine) and the recognition of Israel as a Jewish state are critical issues in the negotiations between the two sides in any discussion of a two-state solution.

“The Key” demonstrates that it’s much more complicated than simply having the UN declare a Palestinian state as was requested in 2011.

A trip to Israel with Discipleship Travel LLC, will provide you the opportunity to meet people from both sides and find out about the peace process from those involved. You might also be interested to hear from pastors about their ministries among Jews and Arabs in the midst of political controversy.