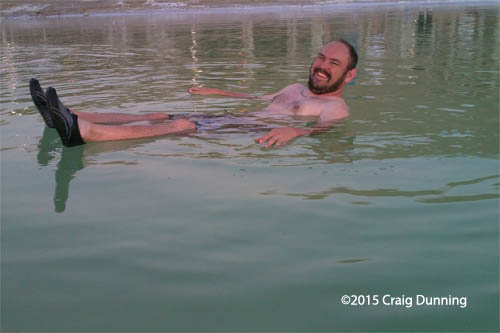 Heath Johnson of Paris, Texas laughs at the sensation of floating in the Dead Sea. (Photo: ©2015 Craig Dunning)

• It is famous for being the lowest location (lake) on the planet (420 meters below sea level; at the present).

• The saltiest body of water on Earth.

• Located in the deepest part of the Syrian-African Great Rift Valley.

• The Dead Sea is the terminal lake of River Jordan.

• The Dead Sea comprises 2 basins: the northern basin is the deepest (713 meters below sea level) whereas the southern basin is very shallow.

• Known also by the names: Tongue lake and the Salt Sea.

• The Dead Sea level withdraws ,on average, 1 meter per year.

• In addition to the salt, the Dead Sea water contains chlorine, bromine, sodium, potassium and magnesium providing many healing qualities.

• In the past, nobody believed that life could exist in the Dead Sea. Today we know for fact that Halophilic bacterium and algae lives in this tough environment.

• The curative properties of the Dead Sea have been recognized since the days of Herod the Great over 2000 years ago.

• The Dead Sea is 80 kilometres (50 miles) long, approximately 14 kilometres (9 miles) wide. The northern and larger part is very deep, reaching at one point a depth of 430m (1320 feet). The southern bay is, on the contrary, very shallow, averaging hardly a depth of 4m (13 feet).

• Although sparsely populated and serenely quiet now, the Dead Sea area is believed to have been home to five Biblical cities: Sodom, Gomorrah, Adman, Zebouin and Zoar.