Moses and the Rock

The Jerusalem Biblical Zoo* has a beautiful rock from which water flows that has been named the Moses Rock. Yes, engineers have plumbed this rock so that water will flow from it, but the display helpfully connects the dots of Scripture. This display visually tells the story of God providing water from a rock in the desert during Israel’s wilderness wanderings. 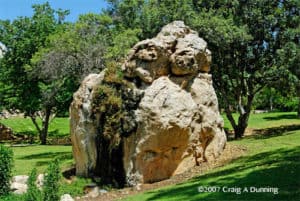 The Moses Rock at the Jerusalem Biblical Zoo

Exodus 20:2-12 (ESV)
Now there was no water for the congregation. And they assembled themselves together against Moses and against Aaron. 3 And the people quarreled with Moses and said, “Would that we had perished when our brothers perished before the Lord! 4 Why have you brought the assembly of the Lord into this wilderness, that we should die here, both we and our cattle? 5 And why have you made us come up out of Egypt to bring us to this evil place? It is no place for grain or figs or vines or pomegranates, and there is no water to drink.” 6 Then Moses and Aaron went from the presence of the assembly to the entrance of the tent of meeting and fell on their faces. And the glory of the Lord appeared to them, 7 and the Lord spoke to Moses, saying, 8 “Take the staff, and assemble the congregation, you and Aaron your brother, and tell the rock before their eyes to yield its water. So you shall bring water out of the rock for them and give drink to the congregation and their cattle.” 9 And Moses took the staff from before the Lord, as he commanded him.

10 Then Moses and Aaron gathered the assembly together before the rock, and he said to them, “Hear now, you rebels: shall we bring water for you out of this rock?” 11 And Moses lifted up his hand and struck the rock with his staff twice, and water came out abundantly, and the congregation drank, and their livestock. 12 And the Lord said to Moses and Aaron, “Because you did not believe in me, to uphold me as holy in the eyes of the people of Israel, therefore you shall not bring this assembly into the land that I have given them.”

*The Jerusalem Biblical Zoo is always an option for Discipleship Travel LLC groups. Group leaders, please let us know that you would like this to be included in your package.