In recognition of Israel’s Holocaust Remembrance Day 2017, I repost the following:

Working with tour groups in Israel is [almost] always a blessing. It’s exciting to see visitors’ faces when, as they say in Hebrew, “the coin falls.” In other words, when “the light comes on” or the connection between a certain event and place happens. I love to see the joy of discovery, especially as it relates to the Bible. But my groups generally have modern cultural and historical interests, too. Every group is different, and I’m regularly on the look out for things out of the ordinary, not on the itinerary that will make my group’s visit to Israel more special than it might already be. For this group, I found that special historical gem in the breakfast line.

As I approached the special-order egg line, I noticed the tattoo on his arm, 137010. Immediately, I knew he was a holocaust survivor because I’ve seen these tattoos in the museum, and probably a dozen times in person. However, I never had the nerve to ask the bearer to share his/her story; I just imagined what it might have been.

This time was different. I took a deep breath and asked the elderly gentleman a) if he spoke Hebrew, and b) if I could ask a question. “Yes,” he answered to both questions. I was hesitant, but I proceeded to ask if he would tell me the story of the numeric tattoo that appeared on his left forearm. I was afraid he would be embarrassed, but he wasn’t. In fact, he seemed pleased that I asked. 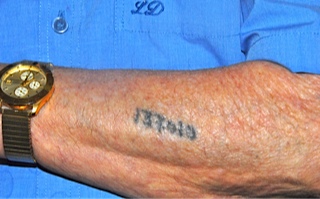 Interacting with my inquiry about his tattoo, he said, “My name is Beniko Gihon; in Germany my name was changed to 137010. I am a Jew originally from Greece.” He continued with a moving, two-minute version of his story. His family had been rounded up in Thessaloniki, and he was the only survivor. Over the course of five years, he was systematically transferred to/from Auschwitz-Birkenau and Dachau. He had a variety of jobs, but mainly focused on his work in the crematoria.

I was translating his story for a man from my group and noticed that others had started to lean in closer to listen in on our conversation, which indicated that they found this interesting, too. After a couple minutes, his eggs and mine were ready, so, unfortunately, we had to bring this encounter to a close. I thanked him for sharing his story, we shook hands, and parted ways.

I found a table near my group and sat down by myself. To say that his story was gut wrenching would be an exaggerated understatement. But, his story wasn’t the thing that affected me the most. It was the question he posed: “Why were the Christians so quiet?”

I wanted my group to hear Beniko’s story, but I wondered if that would be asking too much. As I ate my breakfast, I kept an eye on him from across the room and wondered whether I should ask him to speak on the bus. Since he didn’t seem to mind my initial inquiry, I decided to go for it, and the outcome was just what I had hoped.

After my group boarded the bus, I brought them up to speed on what was about to happen, then I introduced Mr. Beniko. He climbed the stairs and stood proudly in the front of the bus and began to share his story.

Beniko, which is the Greek version of Benjamin, started with some details of his family and how the Nazis came to Greece and killed so many. The rest were taken to the labor and death camps in Germany and Poland, which is where he learned to speak German, and where his name was changed to 137010.

His story lasted longer than I had given him, which I knew it would. But, seeing him standing in the front of the bus and hearing his biography was worth every minute.

Some specific details that pierced my heart:

“I saw, with my own eyes, the soldiers toss little children in the air and shoot them like birds.”

“As people were herded off the trains near the crematoria, they pleaded with the soldiers to know where their children or parents were. The soldiers would point to the smoke rising out of the crematoria and say, ‘there they are.’”

“The people were packed so tightly into the ‘showers’ that when the Zyklon B gas was released they all died standing, and only fell to the ground when the doors were opened. As we removed the bodies, we could see the scratches on the walls where those on the outer edges were trying to claw their way out.”

As a worker at the crematoria, “I collected the fat that came from the bodies as they were burned. The Nazis used the fat to make soap for us prisoners, and I bathed with soap that may have been made from the remains of my parents and other family members.”

Beniko’s story, made the horrors of the Holocaust real and personal for us, impacting each in a slightly different way. I tried to give some current perspective to his presentation because the easy thing would be to say, “I wasn’t there” because none of us were. I reminded the group of the words of James 1:27 that pure religion is to care for the widows and orphans, which I understand to mean “take care of those who can’t take care of themselves.” I also think that being born again demands that Christians have an active interest in “the least of these” (Mt 25).